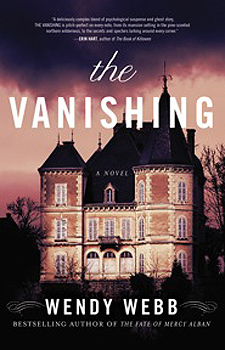 Something was wrong. Seraphina opened her eyes—the people were still around the table, eyes tightly shut, their hands joined together making an unbroken ring, just as they should be. The candles were flickering, their small, warm glow illuminating the darkened room, just as they should be. But not all was as it should be. Seraphina could feel it. There was a rumbling where a whisper should have been. And then silence, complete and utter silence. There were no spirits. Just a deep, dark void.

She closed her eyes and tried again, knowing she had been at the center of scenes just like this one hundreds of times at the request of grieving families, desperate to get in touch with their dearly departed, or simply those who wanted proof of a life beyond this one, the curious, the ones who loved to feel the tingle up their spines when the candles were blown out in a whoosh, when the spirits started speaking.

Some people, when they had seen her perform on the stage or attended one of her séances, would ask Seraphina whether she was actually hearing the voices of the dead or somehow picking up on the wishes of the people around her—the mother desperate to know her child was still somewhere, anywhere but cold and silent in the ground; the widower needing to hear his wife's voice again, gently urging him to put aside the bottle of pills and live without any worry that she would be waiting when his time came; the grown son unable to go on without knowing his mother was finally free of pain and happy. These skeptics wondered if perhaps she had spoken to the people beforehand, asked them about their loved ones, or received the information in another way.

But Seraphina knew what she knew. She heard the voices whispering to her, at first soft in her ear, as though they were wafting on the air from a great distance to reach her. And then she could see them, the dead clinging to the living, hovering nearby, trying to ease their loved ones' pain.

As the people held hands and concentrated, the voices would become louder and louder, the dead swirling around the table in a great jumble, everyone seemingly talking at once, wanting to be heard. Tell him not to forget about the safety deposit box at the bank! I love you Lillian! You must tell her! I'm always with you! Seraphina could hear their words and also feel them, as though the swirling mass of whispers was a tangible thing, sizzling like a lightning strike through her skin and all around her.

It always happened that way. But not this time.

The room wasn't the problem—she had conducted seances at Havenwood before, at the request of the house's owner, Andrew McCullough, who was fond of bringing artists and writers and musicians and all manner of cultured souls to his magnificent home in the middle of the wilderness. She had amazed even the great Charles Dickens himself in this very room years before, he no stranger to the spirit world, and still, he had been dumbstruck by what she told him. They all came to see her, whether it was at Havenwood, or in the parlors of some of the finest houses in Paris or Vienna or New York, all of the people aching for a look behind the veil, all of them believing, or hoping to believe.

She did it for them because she could. There were so many charlatans out there in this age of Spiritualism, so many performers, bilking these poor people out of their fortunes and giving them only cheap parlor tricks in return. The levitating tables, the crystal balls, the knocking. Please. As though spirits knocked.

No, Seraphina had always had the gift. And she didn't need a table, candles, a dark room and people holding hands to use it. That was just showmanship, entertainment, an experience to give an audience. Her husband had created that part of it for her, and it worked. People really wouldn't believe that she could simply look at them and know the depths of their grief and pain, but the fact was, she could. Her gift was always with her. And she knew, with great certainty, that it was the grief of the living that trapped most spirits here on earth, kept them from going to wherever it is that they would ultimately go. Until the living could let go, literally. The way Seraphina saw it, she was helping the living and the dead achieve that.

Her gift had never failed her, never once, until now. The silence at Havenwood surrounding the people so desperate to hear from their dead crept into Seraphina's skin and took hold. She had to do something. She would call the spirits by name.

"John Martin," she said, her voice loud and commanding, naming the husband of the woman sitting next to her, "I call you to join us. Lillian is waiting to talk to you. Celeste Mitchell. Sarah Gale. Mary Longpre. We are waiting to hear from you."

She squeezed the hands of the people sitting next to her, eyeing her host, Andrew McCullough, across the table. His eyes were still closed, his lips slightly moving.

Unwilling to disappoint all of these people, she decided to try something new. Seraphina unclasped her hands and reached into the satchel she always kept by her side and slipped out a lacquered wooden box lined with mirrors that her husband had picked up in the Far East for her. She had never used it in her séances—she never needed any sort of prop before—but this called for desperate measures. She intended to put a candle in the center box to reflect its light off the walls of the room—perhaps that would help set the scene. Perhaps it would call the spirits to her. She knew full well that the people around the table were grieving, for real. She couldn't figure out why she couldn't see or at least hear, their dead.

As soon as she set the box in the middle of the table, Seraphina began to hear the whispers. Finally.

Open the door. Let me out. I am here.

Were the spirits trapped somehow? Somewhere? Seraphina had never experienced anything like this. She opened the box and set the candle inside, and it illuminated the walls of the room with a thousand tiny flames, dancing.

She cleared her throat and spoke again, this time, in a tone not entirely familiar to her.

But instead of the whispers becoming louder and louder, swirling around her so tangibly that she could almost pluck them out of thin air and lay them down on the table before her as they had always done before, she heard that same rumbling she had heard earlier. Far away at first, and then closer, as though it was coming from an unseen animal that was stalking her in the dark, making circles around her before it struck.

One of the women across the table screamed in pain, and jumped up from her chair. The man sitting next to Seraphina stood and let out a roar. Another woman jumped up and fell to the ground. A third began coughing violently, her face turning scarlet, as though someone was choking her.

"Get your hands off me!" she shouted, between gasps.

"What is the meaning of this?" Andrew McCullough cried out. "Seraphina, what is happening here? Do something to stop this!"

Seraphina looked around the room and realized these were not the spirits of the dearly departed. This was something else, something dark and evil and monstrous, something she had never before encountered.

But it was too late.

Return to The Vanishing page