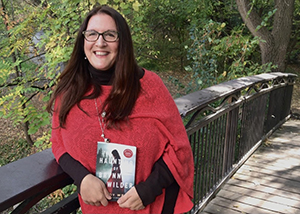 Two books set Wendy on the path of her life—Little Women, by Louisa May Alcott and A Wrinkle in Time by Madeline L'Engle. Through those two books, she realized her love of storytelling, and knew, by the time she was about 11 years old, that she wanted to be a novelist someday.

Wendy was born and raised in St. Louis Park, Minnesota, a suburb of Minneapolis. She graduated from the University of Minnesota, where she majored in political science and minored in French and history. After college, she spent some time living in France with two lifelong friends, and when she returned to the States, she was fortunate enough to get an internship with a congressman in Washington, D.C., and later a job with a Minnesota senator.

When she moved back to Minnesota, Wendy got her first writing job with City Pages, an arts and entertainment weekly in Minneapolis. She has been a journalist ever since, writing for national and local magazines and newspapers, including Duluth Superior Magazine, where she was editor-in-chief for almost eight years.

Even though she loved her career as a journalist, she never forgot her dream of being a novelist. Finding the time to write a novel—that was the hard part. What with making a living and taking care of a young son, she just couldn't find the luxury of spending time devoted to a dream. But finally, when her son Ben was in school and she was working from home as a freelance journalist, she realized she actually had the time to start writing her first novel. And she never looked back.

Wendy lived in Duluth, MN for 16 years with her family and three beloved Malamutes. Now she's back in her home town of Minneapolis, where she is currently at work on her next novel and looking for a new dog.